Mid-August with a group of friends from Academic Mountain Club in Lodz I went to the Alps again, this time to Monte Rosa massif. It is located between Italy and Switzerland and a home to many 4-thousand meter peaks and some of the largest alpine glaciers. We chose Swiss side.
Our first objective was Monte Rosa mountain hut (Monte Rosa Hütte) located at 2883 m on a small rocky plateau near the Grenzgletscher glacier. First hut was built towards the end of XIX century and as mountaineering ad tourism gained popularity it was expanded and built upon. In 2009 old building was replaced by a new wooden structure covered by aluminum. Its futuristic look is based on new design aimed at limiting environmental impact and energy retention. Warning ! – approach requires crampons and knowledge of glacial travel.
In order to get there majority of tourists use Gornegrat Railway from Zermatt town to the last but one Rotenboden station (2815 m) from where track leads to Riffelsee lake and then take a path to the west. We chose the harder option without the train and started our hike early morning burdened by heavy backpacks.
From the glacier’s edge there are 2 routes. Both are marked with orange, plastic poles spaced tens of meter apart. Old one, not as well marked, leads down the rocky slope and big steel ladder to lower part of glacier and winds along the side of it to climb up again toward the hut. I sincerely recommend more popular newer route leading to the west on the glacier and turning south, traversing towards the hut.

After a whole day of walking under hot sun we finally arrived to the hut where we had a hot dinner and went to sleep rather early.

Around 3 am we began our ascent. A well-marked path led up over rocky terrain. Soon we reached the edge of glacier where our 4-man team put on crampons and roped up. In the darkness we had some trouble finding a safe passage through numerous crevasses. At dawn we were already higher on easier ground. We trudged up a snowy slope arduously gaining vertical meters to finally reach jagged, rocky ridge. Altitude and occasional rock climbing had slowed us down.
In the afternoon we stood on the summit of

Duforspitze 4634 m, the second highest independent peak in the Alps.
The weather turned worse and forced us to abandon attempt at a nearby Nordend. On the way down we met another Polish team, Tadeusz and Kamil. We abseiled to the pass below covered by fresh snowfall.
Few hundred meters below snowfall turned to rain, however in the evening clouds cleared rewarding us with a warm sunset. In the comfort of Monte Rosa hut we could celebrate another ascent. 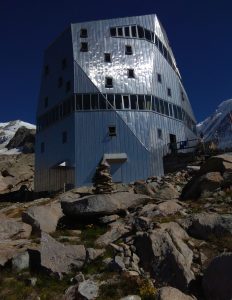 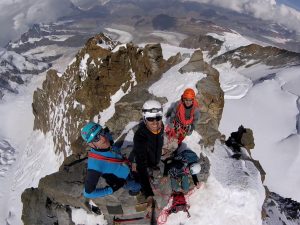