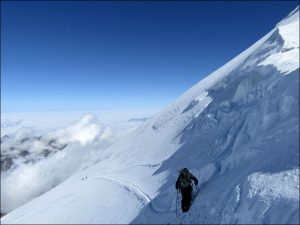 I had tried to climb Kazbek in July. However the bad weather and rest of my team did not allow me to reach the summit. Undeterred by my previous failure I decided to try my luck again in September. This time I was joined by a bigger, more experienced group of friends.

Three of them have just climbed Elbrus a few days before. Me and the 5th member of our team started our climb from Stepantsminda village on September 23rd due to lack of acclimatization on for the 2 of us we choose to make the intermediate camp at 3100 m. Burdened by our heavy backpacks we reached it in the evening, where we met the rest of our team waiting. First night brought bad weather. Numerous storms, strong wind and torrential rain was waking us up and soaked most of our equipment.

Luckily morning brought us a respite. We used the time to dry our sleeping bags, jackets and tents as well as to prepare breakfast.  Soon we were on our way again crossing lower Gergeti glacier. Late afternoon we reached our final camp – former meteo station. Some of us decide to use available accommodation in the building (35 GEL per person per night) to fully recover and dry the gear. I remained outside in the tent. Big thank you to Łukasz from Safe Kazbek foundation who let us stay in one of their tents.

On the third day the sky cleared out. We went up to 4200 m to scout the route up. It was also the last opportunity to train safe walking over glaciers and rescue techniques. At night on September 26th 2:30 AM we moved out. Two of us did not decide to go for the summit push due to health problems so there were 3 of us left.

We started out at a good pace. Weather windows was used also by other teams both from Georgian as well as Russian side. Sunrise hit us at around 4500 m We kept going taking in magnificent views. The last hundred meters to the summit were especially difficult because of a layer of hard ice making it necessary to fix ropes and slowing us down considerably. All three of us reached the summit shortly before noon. Only for me it was a second attempt. Low temperature and strong wind did not encourage lengthy rest and soon we were on our way again.

The way down was a lot faster. We returned safely to our camp after 14 h. 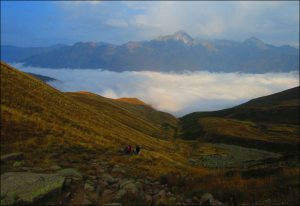 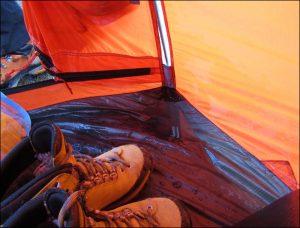 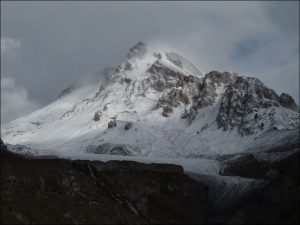 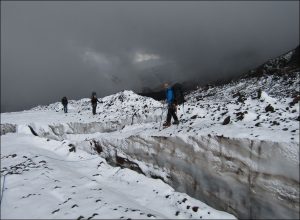 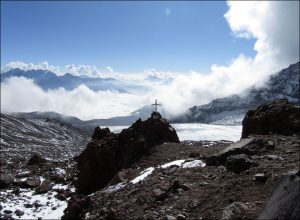 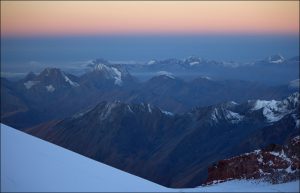 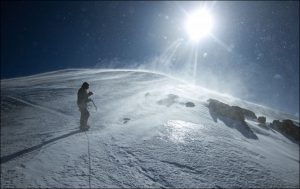 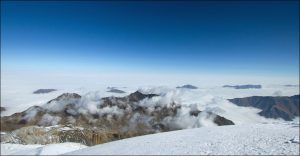 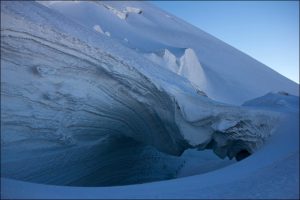