Kazbek is 5047 m high and belongs to The Greater Caucasus mountain range located on Russia and Georgia border. It is in fact a volcano in a tectonically active region.

According to some legends it was this mountain that Gods chained Prometheus to as punishment for stealing the secret of fire.

The area around Mount Kazbek is a nature protected zone. It is by far the most well-known mountain in Georgia. Gergeti Trinity Church with the peak in background is depicted on many pictures and postcards. The mountain attracts many tourists every year. Some just go for a hike to the edge of glacier or around the region but many try to go for the summit itself. It offers the chance to break this 5k altitude which is not possible in the Alps. This gave rise to many local guiding, porter and climbing equipment rental agencies.

However it also has a darker side. Cheap flights, no visa requirements for most countries, no peak permit draws many inexperienced people, especially from Eastern Europe, who put themselves in grave danger. Some people who go there have no equipment, knowledge and skills to safely climb it.

Kazbek is often underestimated, labeled as a tourist mountain – in my opinion unjustly so. Despite lower altitude it is more demanding than Elbrus. Although there is no danger of rock fall on the normal route the glaciers there hide many crevasses. There are no official mountain rescue services. Out there climbers have to rely on their skill and companions.  Frequent fatal accidents, especially among inexperienced Polish tourists have led to installment of multilingual signs warning tourists of the danger ahead.

This summer I had the opportunity to witness it first-hand having to perform crevasse rescue action for a small team, with no gear, that lost their way on the glacier and one of them fell into a crevasse. Luckily the victim was not injured – just hypothermic and scared. With my friends we led them to safe ground afterwards.

If you do decide to climb Kazbek make sure you have alpine and glacier experience including self-recue. 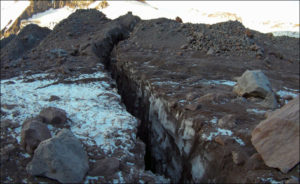