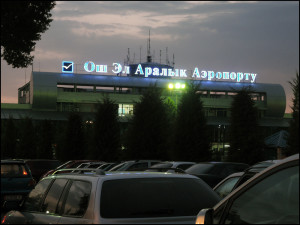 Lenin Peak (7134 m) is located on the border between Kyrgyzstan and Tajikistan. Official name is Ibn Sina Peak. Lack of peak permit fees, major climbing difficulties and easy access to base camp make it a frequent destination of mountain expeditions both as a preparation before more demanding mountains and standalone target. However no 7 thousander is easy or safe. According to summitpsot.org only 1 in 4 gets to the summit and frequent weather changes are the reason of untimely end of trip or frostbite and death. 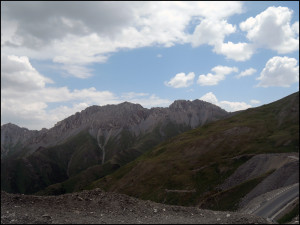 I had been planning the trip half a year in advance as a new challenge after climbing Mont Blanc. My injury shattered any preparation plans. I was even considering cancelling the trip but in the end I went there in condition worse than I had been in a year before.
I was using Ak-Sai Travel agency which provided me hotel in Osh, transport to and accommodation in base camp.
The Pamir Mountains made a great impression on me – these mountains are really huge – more majestic than the Alps. Valleys are already on 3- 3,5 k m with no trees. Nothing obscures the snowy peaks. Out there you can really feel how helpless a man is against the force of nature. Unlike in Europe there are no rescue services. Quite often there is no phone signal coverage or human settlements. You can rely only on yourself. Help of other climbers is doubtful. Hundreds of mountaineers try to scale the mountain and each year a few perish. 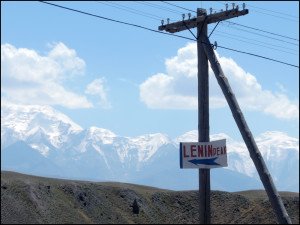 Details of my trip.

My plane landed in Osh around 4 AM. After clearing the customs I met with Ak-Sai travel representative. Quick breakfast and around 10 am our Polish-Russian-French group was on our way in a small bus heading south. The closer we got to mountains the better the views. Winding mountain roads went up to cross passes over 3k m. Close to Sary-Tash village we left the main road and over the Kyzyl-Kul river headed to base camp. Rapid change of altitude from 200 to 3700m within 24 h resulted in a mild headache and shortness of breath.

In the morning next day I felt a lot better and along with a pair of French we ventured for an acclimatization walk. We went up a grassy ridge of nearby Peak Petrovskogo where I reached 4300m

On the 3rd day we moved to camp 1. Most people sent their luggage for an extra fee (2 euro per kg) on packhorses. Wanting to save bit I kept half of my equipment – around 15 kg which I later regretted 😉

The path to camp 1 at first moved through a grassy meadows but soon it changes to stony pats across unending hills – if you can call that around 4,5k m terrain. After 5h I reached C1. The following day I spent on another acclimatization walk to a nearby hill – around 4700m. On the sixth day long before dawn at 3 am we start our walk to camp 2. For safety I joined a Polish group to cross the glacier roped up because of crevasses. 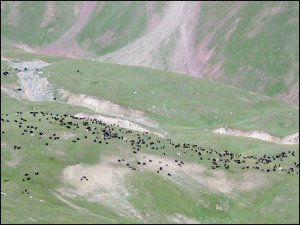 After 10 h of walking in steep deep snow we reached camp2 at around 5300m. Lack of good acclimatization and exhaustion is visible. Each move is slow and requires a lot of effort. In deteriorating weather I dug a snow platform and pitched my tent. Forecast did not come true – wind and snow was picking up. Exhausted I tried to get some rest in my cold sleeping bag wondering whether my new tent would withstand the fury of elements. 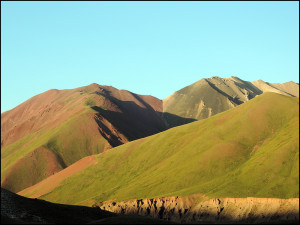 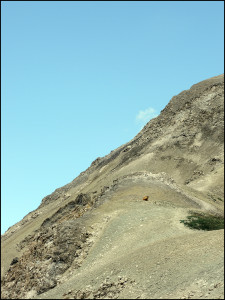 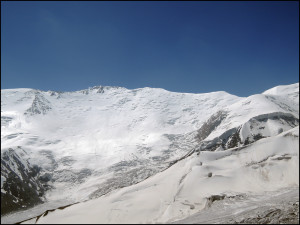 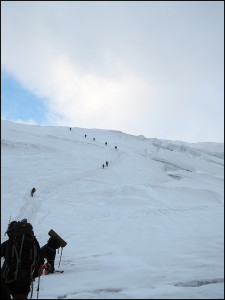 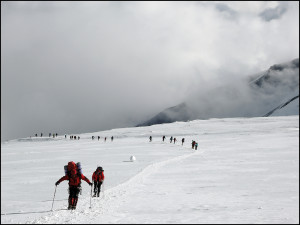 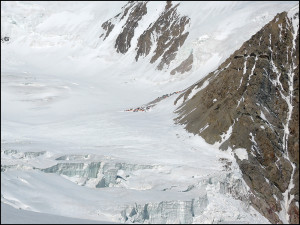